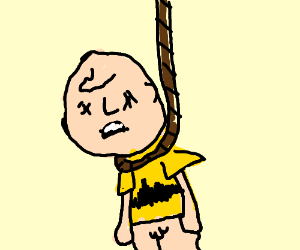 This has to be some evil portent for America....
Peter Robbins Dies: Former Child Actor Who Voiced Charlie Brown Was 65
Peter Robbins, who voiced Charlie Brown in the classic 1960s Peanuts cartoons, has died. The former actor died by suicide last week, his family told San Diego’s Fox 5. He was 65. Robbins (real name Louis G. Nanasi) was born in 1956 in Los Angeles. He began acting in 1963 and was the first to play the Charles M. Schulz-created character of Charlie Brown, including in such perennial holiday animated classics as A Charlie Brown Christmas (1965) and It’s the Great Pumpkin, Charlie Brown (1966). In addition to voicing Charlie Brown for four years, Robbins recurred on the 1968 comedy Blondie and guest starred on such TV series as Rawhide, The Munsters, The Donna Reed Show, F Troop, Get Smart and My Three Sons. Robbins quit acting in 1972. For awhile, he worked as a DJ in Palm Springs. Robbins, who suffered from bipolar disorder, made headlines in 2015 when he was sentenced to five years for making threats to several people, including public figures. He was released in 2019. Source
at January 26, 2022