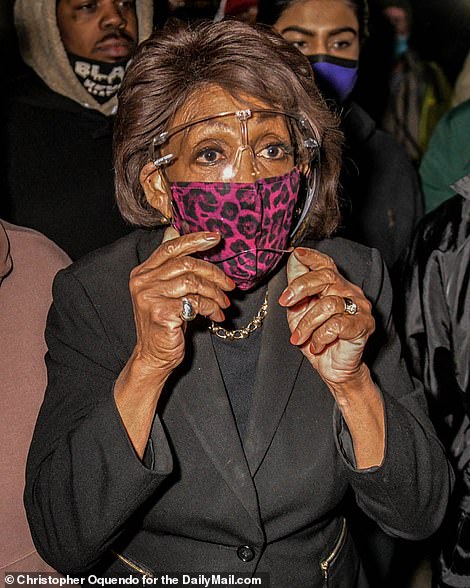 'Maxine Waters may have handed defense grounds for appeal and the turning over of this trial': Derek Chauvin trial judge blasts 'abhorrent' Democrat for calling for riots if no conviction
Congresswoman Maxine Waters may have handed Derek Chauvin's defense grounds for appeal and the turning over of any guilty verdict. Speaking after the jury was sent out on Monday afternoon, Chauvin's attorney Eric Nelson once again made a bid to have the case against his client thrown out on grounds that there was no way the jury could be untainted by the excessive publicity surrounding the case. 'Now that we have US representatives threatening acts of violence in relation to this trial it’s frankly mind-blowing,' Nelson said. Taking it into consideration Judge Peter Cahill said: 'I grant that Congresswoman Waters may have given you something on appeal that may result in this whole trial being overturned'. Judge Cahill denied Nelson’s move for a mistrial but he said: 'I wish elected officials would stop talking about this case. They should respect a co-equal branch of government.' He said that failure to do so was 'abhorrent', but added: 'I don't think it's given additional material with which to prejudice the jury. A congresswoman’s opinion really doesn't matter a whole lot.' Waters (D - California) had joined protesters in the Minneapolis suburb of Brooklyn Center on Saturday night for a demonstration over the death of Daunte Wright, a 20-year-old black man shot dead by a white police officer during a traffic stop on April 11. Waters told the protesters that she will fight for justice on their behalf and urged them to 'to get more confrontational' - just one day after protests descended into violence. 'I hope we get a verdict that says guilty, guilty, guilty,' she said of the Chauvin trial. 'And if we don't, we cannot go away. We've got to stay on the street. We get more active, we've got to get more confrontational. We've got to make sure that they know that we mean business.' Source
at April 19, 2021