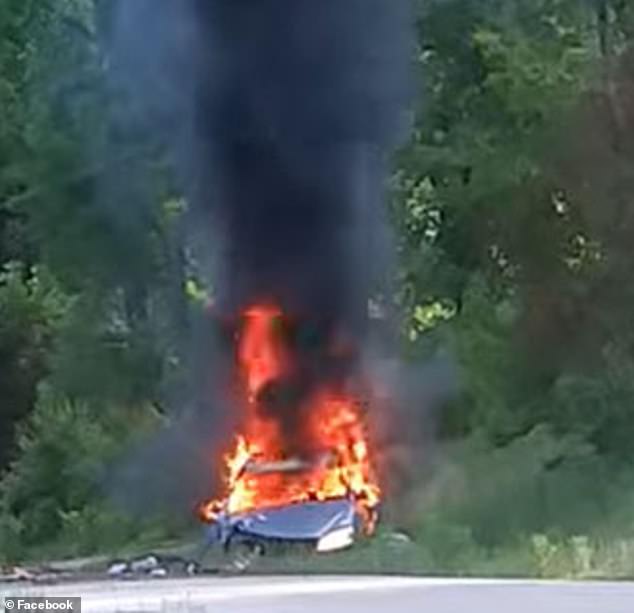 Gas-hoarding woman's car crashes and bursts into flames fleeing from police - while a Hummer filled with cannisters explodes amid panic buying during pipeline crisis
A gas-hoarding South Carolina woman has suffered burns to her body after her car crashed and burst into flames while she was fleeing from police. Jessica Gale Patterson, 28, was driving through Pickens County in her white Pontiac G6 on Thursday night when an officer attempted to stop her over a stolen license plate. Unbeknownst to the cop, Patterson's Pontiac was loaded up with containers of fuel which she had hoarded amid the current gas crisis caused by the Colonial Pipeline hack. According to statement put out by Pickens County Sheriff's Office, Patterson 'accelerated her vehicle in an attempt to elude law enforcement' before she 'lost control of the car' and it flipped over at the side of the roadway. The vehicle immediately caught fire and multiple explosions were heard inside before Patterson emerged from the Pontiac doused in flames. 'The deputy pushed Patterson to the ground in order to put out the flames," the sheriff's office stated. She was subsequently rushed to hospital, but the severity of her burns has not yet been publicly disclosed. Patterson has admitted to police that she was hoarding gas in the trunk of the car, which they have determined were the 'catalyst for the explosions'. Source
at May 14, 2021