47 cats are found living in a car with their homeless owner during sweltering 90F Minnesota heat as he 'didn't want to be without the animals' - having already given up 14
Forty-seven cats were rescued from a vehicle that was parked in sweltering heat at a southeastern Minnesota rest area, authorities said Wednesday. The cats discovered Tuesday were living in the car with their owner who recently became homeless and didn't want to leave the animals behind, according to Animal Humane Society investigator Ashley Pudas. 'Unfortunately, with the heat yesterday he recognized that it was above and beyond what he was capable of at this time. And he let us help them out,' she said, noting that the owner had not left the cats alone. The owner had been living with cats in the vehicle 'for some time,' the Animal Humane Society said.Animal Humane Society said: 'Sweltering June heat and humidity. No home, no air conditioning. Living inside your car alongside your cats and unsure where to turn. This was the reality a community member faced yesterday when a concerned police officer knocked on their car window.' Despite the heat and unsanitary conditions, most of the cats had only minor medical issues. The rest stop was on Interstate 35 near Harris, about 50 miles north of Minneapolis. Temperatures in the area climbed over 90 degrees on Tuesday. 'Our Humane Investigations agents worked quickly and carefully to bring all four dozen animals back to AHS,' said the society. 'Ranging in ages from just under a year to 12 years old, our expert veterinarians have just started examining each cat, providing vaccinations, balanced nutrition, specialized behavioral rehabilitation, and spay/neuter surgery. Source 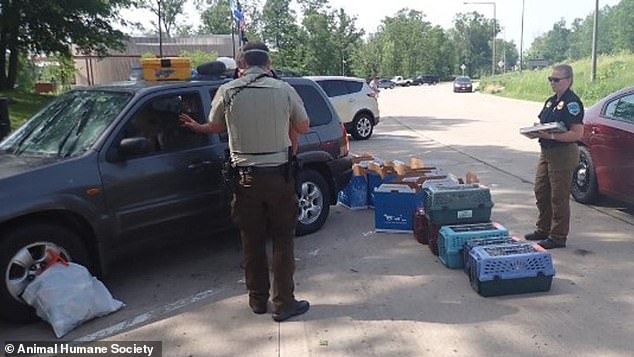