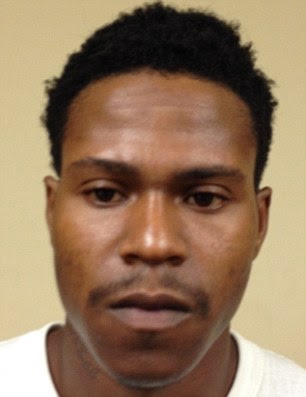 A West Point man was taken to hospital with life-threatening injuries after he and a friend were attacked by a group of around 20 people in a Huddle House parking lot, police said, potentially as retaliation for Michael Brown's killing. Ralph Weems IV, who is white, was injured early Saturday but is now in fair condition at North Mississippi Medical Center, hospital spokeswoman Genie Causey said. A relative, Bradley Barnes of Madison, told The Associated Press by telephone on Sunday that his brother-in-law was in a medically induced coma following brain surgery. 'They're going to try and wake him up tomorrow and see what damage was done,' Barnes said, describing Weems as a 32-year-old former Marine who had served in Iraq.Police Chief Tim Brinkley told the Clarion-Ledger that 22-year-old Courtez McMillian of Okolona was arrested on Monday evening. He is being held in the Clay County Detention Center and will be charged with aggravated assault. Brinkley said other arrests are also pending, and that most, if not all of the assailants appear to come from Monroe County. Detectives are reviewing video footage of the incident. David Knighten of West Point told AP earlier by phone that he and Weems had gone to a Waffle House early Saturday. He said a black man waved him over outside the restaurant and told him politely that people were upset by the killing of 18-year-old Michael Brown in Ferguson, Missouri, and it wasn't a safe place for whites. When he went in, he said, Weems was inside and was arguing with a round seven black men. They left after an argument that brought police, Knighten said. Brinkley said a Waffle House employee told officers who answered a 1 a.m. disturbance call that a patron was creating a disturbance and upsetting other patrons. After he was asked to leave, employees also asked the other patrons to leave, Brinkley said. Knighten said he showed those officers his .45-caliber handgun and his concealed carry permit. On the way to Weems' house, Knighten said, they went into a Huddle House restaurant with a nearly vacant parking lot. However, he said, they apparently had been followed by a group of more than 20 black men. Knighten, who said he had served with the Air Force in Afghanistan, said he came out of the restroom to find Weems surrounded. 'I was trying to defuse the situation,' he said. After some shoving, he said, the security guard told everyone to leave. Knighten said some people blocked him from leaving with Weems. When he got out, he said, Weems was down and people were kicking him. Daily Mail Read More>>>

I Bet They Even Took The Day Off From Their Work..... Court hears how four-month-old boy's maggot-infested body was found in a baby swing after he went unchanged for a week and died of extreme 'diaper rash' as his father faces trial for murder A court heard devastating testimony about how a four-month-old baby boy's maggot-infested body was found after he died of extreme 'diaper rash' at the start of his father's trial for murder. Sterling Koehn had been in the same diaper for nine to 14 days when his body was found in the swing August 30, 2017, at his parents' apartment in Alta Vista, jurors were told. The baby's father, 29-year-old Zachary Paul Koehn, is charged with murder and child endangerment. Source

BOSTON (CBS/AP) — New details emerged Thursday as authorities continue to investigate the deaths of a woman and two young children who were found unconscious near a Boston parking garage on Christmas Day. Suffolk District Attorney Rachael Rollins the woman who died was the mother of the two young children. The woman was 40 years old and the children were 4 and 15 months. Rollins said the deaths appeared to have been related to a suicide. She added that it appears the two children fell first, then the mother. The woman and children were found unconscious Wednesday around 1:30 p.m. on a sidewalk near the Renaissance Parking Garage. They were rushed to an area hospital, where they were pronounced dead. “Today is a tragedy,” said Boston Police Commissioner William Gross, during a Christmas Day news conference. Video showed police looking at an SUV, with several doors wide open, parked on the top level of the parking garage, which is adjacent to the Ruggles MBTA rail station. Gross sai…

Teen driver, 19, is shot dead by back seat passenger, 22, after AR-15 rifle he was holding fired through her seat  A teenager was killed while driving her car after a passenger in the back fired an AR-15 rifle and hit her through the seat on Tuesday, police say. Annalysa McMillan was driving her car in Marion, Indiana, when the rifle discharged behind her and struck her in the back. Police say the single bullet went straight through driver's seat and hit the 19-year-old in the back. The shooting led to a minor car accident with another car, and officers who rushed to the scene could not resuscitate her. Austin Smith, 22, has been preliminary charged with reckless homicide in her death, police said. Officers say Smith was holding the weapon when it went off. He is being held on $1,005 bail.Smith also faces a charge of criminal recklessness while armed with a deadly weapon. Both counts are felonies. Two other people in the vehicle, aged 19 and 18, were not hurt, police s…

Atheism at such a young age........
Now if she were a God believing Roman Catholic the little girl would have prayed for her deceased father instead of turning to comfort food.....
Lessons learned.... Morbidly obese comfort eater who managed to shed almost HALF of her 591lb bulk reveals her husband walked out as she battled to lose the weight on My 600lb Life Tamy Lyn Murrell, 45, from Covington in Kentucky, began overeating when she was just eight years old after witnessing her father's sudden death from a heart attack and the mental decline of her depressed mother. The mother-of-one appared on the TLC series My 600lb Life, having turned to Dr Younan Nowzaradan for help with the weight battle that had plagued her life to the point where folds of skin on her stomach were virtually dragging on the floor. The surgeon immediately put her on a 1,600 calorie-a-day diet, and promised to removed the lymphedema mass - or swelling - to her stomach if she lost weight. Within seven mont…

Mother, 20, charged with first-degree murder for 'stabbing her 7-month-old son and throwing her two-year-old son from an 11th story window before jumping out herself in murder-suicide attempt' A Chicago mother, 20, accused of killing her two young sons by leaving one in a bathtub and throwing another from an 11th-floor apartment window, has been charged with two counts of first-degree murder. Aleah Newell is also charged with attempted murder for stabbing her grandfather before she jumped from the apartment building on Chicago's South Side on Thursday. Newell did not appear at Saturday's bail hearing because she is still recovering at University of Chicago Medical Center, a Chicago police officer testified at the hearing.Source