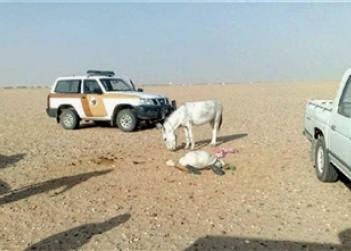 (Beiruting) A Saudi Sheikh has died attempting to sexually abuse, a donkey. The poor animal, which is primarily a victim in this case. According to reports circulating on the net, Saudi police found the body of Sheikh abuser the day after the murder, and found that the victim-victimhood received a severe kick in the face and three kicks in his chest when he tried to sodomize the animal. The man died of his injuries after long moments of suffering. Police who found the donkey and tied the victim's car near the body also speculated that Sheikh had removed his pants and left in his vehicle (4X4) before trying his misdeed .
at August 17, 2014