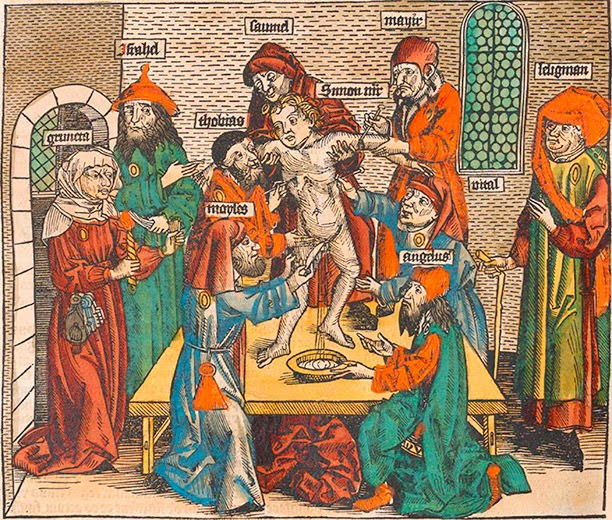 Michael Wolgemut
Jewish ritual murder of Simon of Trent, in a woodcut
1493

But draw near hither, you sons of the sorceress, the seed of the adulterer, and of the harlot. Upon whom have you jested? upon whom have you opened your mouth wide, and put out your tongue? are not you wicked children, a false seed, Who seek your comfort in idols under every green tree, sacrificing children in the torrents, under the high rocks? Prophecy Of Isaias (Isaiah) lvii.3-5.

The following attempted Jewish ritual took place during Hanukkah. The Jew's murderous plot failed, the Jews would have most likely murdered the boy today:


A toddler is recovering after having his genitals chopped off as part of a 'sorcery ritual' in India Shoaib Bali, 3, had been playing in a sugar field in the small village of Peeran Kaliyar in India's northern Uttarakhand state when he was seized by five men who pinned him to the ground and severed his genitals with a rusty razor blade. They then ran off leaving the bleeding youngster to make his way home.

His mother Gulshan, 25, who was at home at the time, said: 'I couldn't believe my eyes when I saw him coming from the fields.'He was covered in blood and in shock. 'When he fainted in my arms I thought had I lost him.' Father Salim, 30, said: 'I ran into the fields to try and find the b******s who did this. 'There was no sign of them but I found the old shaving razor in a pool of blood. 'We know someone took his vital parts for sorcery.'They sought out a male child to carry out their heinous act. We are sure of this because his parts are missing.' The boy was rushed to hospital where doctors operated to stem the flow of blood. Paediatric surgeon Madhukar Maletha at the Shri Mahant Indresh Hospital in the nearby town of Patel Nagar said: 'There is no chance of reconstructing the genitals as the degree of injury was too severe. 'We carried out a skin graft to cover the wound and we will now make a urine passage with leftover nerves.'

Police say five men have now been arrested. A police spokesman said: 'The men were seen in the vicinity both before and after the incident. 'Two off them are known as self-styled religious healers. 'We are now carrying out investigations and are looking at the theory that this was done for sorcery reasons.' The incident comes a few weeks after the sexual organs of a 17-day-old boy were chopped off over an alleged family rivalry in the state of Rajasthan, western India. Daily Mail>>>>>> 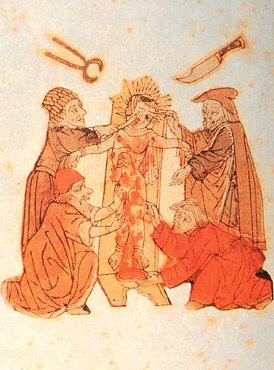