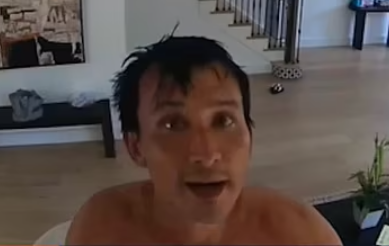 Naked man breaks into Bel Air home, kills family pets
LOS ANGELES - A Bel Air homeowner is in shock after coming face to face with a violent naked man who broke into his house and killed the family pets. Mat Sabz was home alone Thursday afternoon when his wife called to tell him that security cameras showed a naked man breaking into their home. "I see a man downstairs, eye to eye. Immediately I raised my voice and pointed at him saying ‘hey what are you doing’", Sabz told FOX 11. However, that encounter did not stop the naked intruder. "He didn’t leave. He looked at me and said ‘this is my house, what are you doing here’ and before I could say a word he said ‘I’m going to call the police’. And right away I realized that this is not a person that you want to engage with any further," Sabz stated. Mat ran into a room while the intruder went back downstairs and made himself at home; he was even caught swimming in the pool and trying on clothes. The suspect then saw the homeowner’s two parakeets. "First he smiled at them like a serial killer. He put his hands near them, dropped them, and stomped on them. The other bird knew what was going on. You can hear the bird screaming and he did the same thing with the second bird. And that kind of changed everything when we saw that he killed these two defenseless animals." Source
at June 21, 2021