Probably screamed at the homeless guy:

A heartless jogger who was caught on camera trashing a homeless man's camp and throwing his belongings into a lake has been arrested. Henry William Sintay was taken into custody in Oakland, California on Monday and charged with robbery. The 30-year-old was filmed on Friday destroying the camp set up next to Lake Merritt where homeless man Greg Markson, who goes by the nickname Drew, had been living. Despite outraged bystanders pleading for Sintay to stop, he continued to rummage through the belongings before tossing some into the lake and a trash can. Source 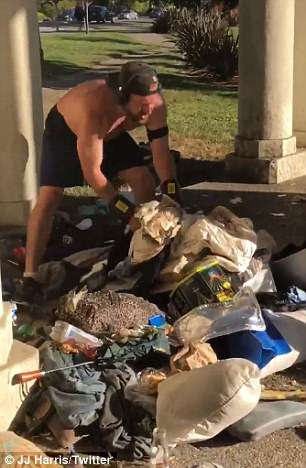