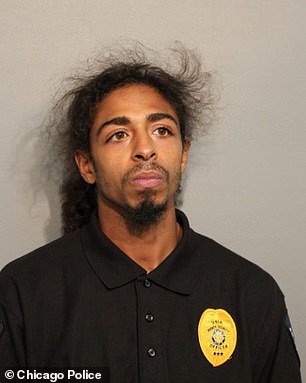 'I'm going around giving blessings': Gunman, 32, brags about his random shooting rampage in Chicago's South Side as he kills four - including student, 30, sat in his car - before being shot dead by police
A gunman was shot dead by police after they said he went on a shooting spree around the Chicago area overnight, killing four victims and wounding at least three others. The shootings began in Chicago on the South Side at the 5300 block of South East End Avenue around 1:50pm local time on Saturday afternoon, when a suspect identified as Jason Nightengale, 32, opened fire on a 30-year-old University of Chicago student while he was sitting in his car, killing him.The deceased student has not been identified publicly, nor have any of the other shooting victims so far. 'It is with great sadness that we inform our community that a current student of the University was shot and killed this evening in a parking garage of the Regents Park apartment complex at 5035 S. East End Avenue,' the school said in an emailed statement. According to The Chicago-Tribune, Nightengale next turned his sights on an apartment building at the 4900 block of South East End Avenue. Once inside, Nightengale allegedly shot a 46-year-old security guard for the building, who later died at a hospital. 'He proceeded to walk into the building and I think she told him he had to leave the building and then he shot her,' a neighbor told ABC7 Chicago. Source
at January 11, 2021