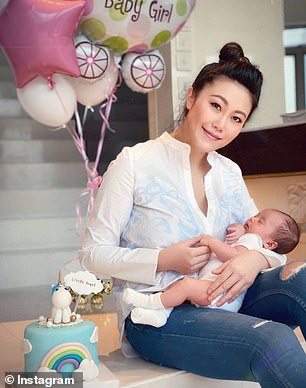 American-Chinese socialite, 34, who rubbed shoulders with Hillary Clinton 'jumps to her death naked from her Hong Kong penthouse while holding five-month-old daughter'
An American-Chinese socialite has reportedly died in Hong Kong after plunging from her penthouse naked while carrying her five-month-old daughter in her arms. Luo Lili, 34, who had rubbed shoulders with the likes of Hillary Clinton and Rita Ora, reportedly jumped to her death with her baby after suffering post-natal depression, according to multiple reports from local media. As the only daughter of a real estate tycoon mother who owns multiple luxury development projects in China, Ms Luo appeared to have lived a lavish life, studying and travelling around the world from a young age. On Wednesday, the Hong Kong police found the bodies of a 34-year-old woman and her five-month-old daughter at the bottom of an apartment block, according to an official statement. No notes were found at the scene, said the police, who are still investigating the incident and determining the cause of death. The authorities did not identify the deceased. However, local news outlet, including HK01 and Ming Pao, have named them as the American-Chinese business woman Ms Luo and her young daughter. Source
at January 11, 2021