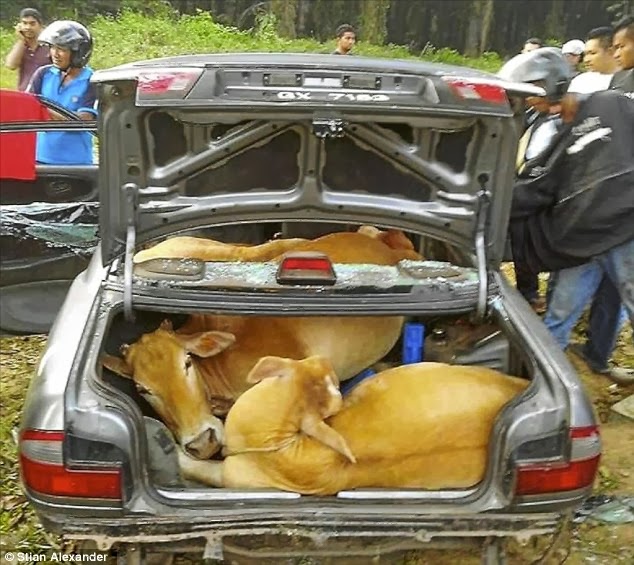 Dozy thieves had to abandon their car after it broke down when they squeezed four stolen cows into it. The crooks used a blowpipe to tranquillise the animals before loading them into their Proton Wira motor, which has folding rear seats. One cow was placed in the boot and the other three squeezed into the rear of the car.As the three crooks fled the scene of the crime - two on motorbikes and one driving the car - in Bukit Mertajam, Malaysia, on Friday, however, the car broke down under the weight of the four beasts. Daily Mail Read More>>>>>

Why did the Muslims steal four cows?

In Islam, sacrificial animal slaughter is a detailed process. Factually the whole procedure is meant to minimize the killing of animals. Thus, Bawa Muhaiyaddeen explains:

“While you recite the Kalimah, you must complete the severing in three strokes of the knife, one for each recitation. The knife has to be swept around three times, and it must not touch the bone. It must be extremely sharp, and the length is prescribed according to each animal - so much for a fowl, so much for a goat, so much for a cow. ... Also, the animal must not regurgitate any food, and it must not make any noise; otherwise, it becomes haram. The person who holds the animal and the person who cuts it must always observe the five times prayer. Therefore, it must be the Imam and the mu’azzin who perform the qurban, because very often they are the only ones who regularly observe the five times prayer. This also means that the qurban must take place near a mosque where two such people can always be found. Before beginning the slaughter, they must first perform their ablutions, and then they must recite the kalimah three times and feed water to the animal which is to be sacrificed. The neck of the animal must be turned in the direction of the Qiblah [Mecca], so that the eyes of the sacrificial animal look into the eyes of the person who is doing the sacrifice. The person must look into the eyes of the animal and then, saying the kalimah, he must cut the neck. And he must continue to look into the eyes of the animal until its soul departs, repeating the Zikr all the while. Then after the soul has departed, he must say the kalimah once again and wash the knife. Only then can he move on to the next animal. He has to look into the animal’s eyes, he has to watch the tears of the animal, and he has to watch the animal’s eyes until it dies - hopefully, his heart will change.” (M. R. Bawa Muhaiyaddeen, Asma’ ul-Husna: The 99 Beautiful Names of Allah, 1979, p. 182)

What did the Muslims intend to do with the four stolen cows? 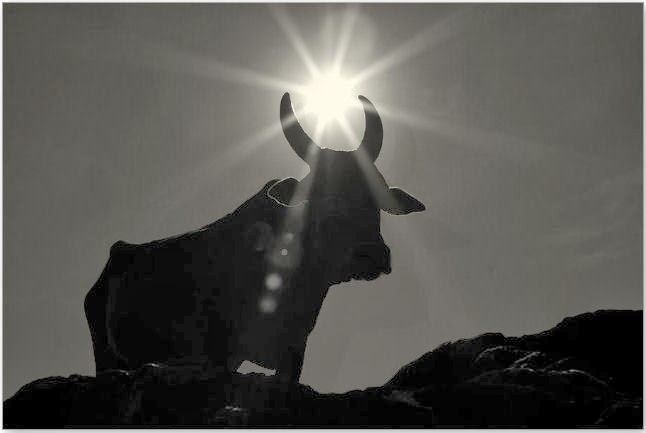