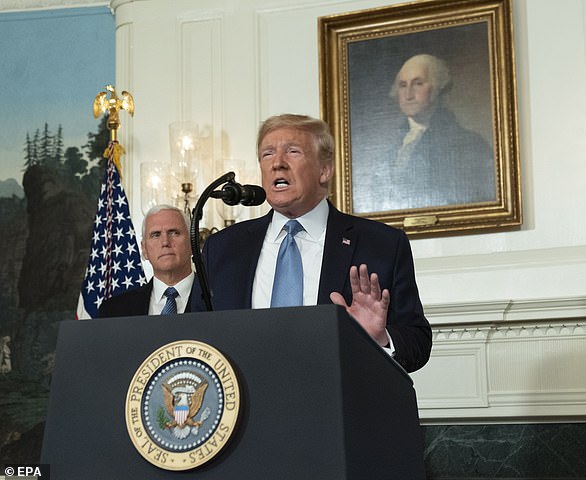 President Donald Trump delivered remarks on the morning of Monday, August 5, 2019, less than 48 hours after a pair of deadly mass-shootings in El Paso, Texas and Dayton, Ohio devastated Americans:

'My fellow Americans, this morning our nation is overcome with shock, horror and sorrow. This weekend more than 80 people were killed or wounded in two evil attacks. On Saturday morning in El Paso, Texas a wicked man went to a Wal-Mart store where families were shopping with their loved ones. He shot and murdered 20 people and injured 26 others, including precious little children.

'Then in the early hours of Sunday morning, in Dayton, Ohio, another twisted monster opened fire on a crowded downtown street. He murdered nine people including his own sister, and injured 27 others.

'The first lady and I join all Americans in praying and grieving for the victims, their families and the survivors. We will stand by their side forever. We will never forget. These barbaric slaughters are an assault on our communities, an attack upon our nation and a crime against all humanity.

'We are outraged and sickened by this monstrous evil, the cruelty, the hatred, the malice, the bloodshed and the terror. Our hearts are shattered for every family whose children, husbands and wives were ripped from their arms and their lives.

'America weeps for the fallen. We are a loving nation, and our children are entitled to grow up in a just, peaceful and loving society. Together, we lock arms to shoulder the grief. We ask God in heaven to ease the anguish of those who suffer. And we vow to act with urgent resolve.

'I want to thank the many law enforcement personnel who responded to these atrocities with the extraordinary grace and courage of American heroes. I have spoken with Texas Governor Greg Abbott and Ohio Governor Mike DeWine, as well as Mayor Dee Margo of El Paso, Texas, and Mayor Nan Whaley of Dayton, Ohio, to express our profound sadness and unfailing support.

'Today we also send the condolences of our nation to President Obrador of Mexico and all the people of Mexico for the loss of their citizens in the El Paso shooting. Terrible, terrible thing.

'I have also been in close contact with Attorney General Barr and FBI Director Wray. Federal authorities are on the ground and I have directed them to provide any and all assistance required, whatever is needed.

'The shooter in El Paso posted a manifesto online, consumed by racist hate. In one voice our nation must condemn racism, bigotry and white supremacy. These sinister ideologies must be defeated. Hate has no place in America. Hatred warps the mind, ravages the heart and devours the soul.

'We have asked the FBI to identify all further resources they need to investigate and disrupt hate crimes and domestic terrorism. Whatever they need.

'We must recognize that the Internet has provided a dangerous avenue to radicalize disturbed minds and perform demented acts. We must shine light on the dark recesses of the Internet and stop mass-murders before they start.

'The Internet, likewise, is used for human trafficking, illegal drug distribution and so many other heinous crimes. The perils of the Internet and social media cannot be ignored, and they will not be ignored.

'In the two decades since Columbine, our nation has watched with rising horror and dread as one mass shooting has followed another, over and over again, decade after decade. We cannot allow ourselves to feel powerless. We can and will stop this evil contagion. In that task, we must honor the sacred memory of those we have lost, by acting as one people. Open wounds cannot heal if we are divided. We must seek real bipartisan solutions – we have to do that, in a bipartisan manner – that will truly make America safer and better for all.

'First we must do a better job of identifying and acting on early warning signs. I am directing the Department of Justice to work in partnership with local, state and federal agencies, as well as social media companies, to develop tools that can detect mass-shooters before they strike.

'As an example, the monster in the Parkland High School in Florida had many red flags against him, and yet nobody took decisive action. Nobody did anything. Why not?

'Second, we must stop the glorification of violence in our society. This includes the gruesome and grisly videogames that are now commonplace. It is too easy today for troubled youth to surround themselves with a culture that celebrates violence. We must stop or substantially reduce this, and it has to begin immediately.

'Cultural change is hard, but each of us can choose to build a culture that celebrates the inherent worth and dignity of every human life. That's what we have to do.

'Third, we must reform our mental health laws to better identify mentally disturbed individuals who may commit acts of violence, and make sure those people not only get treatment, but when necessary, involuntary confinement. Mental illness and hatred pulls the trigger, not the gun.

'Fourth, we must make sure that those judged to pose a grave risk to public safety do not have access to firearms, and that if they do, those firearms can be taken through rapid due process. That is why I have called for red-flag laws, also known as Extreme Risk Protection Orders.

'Today I'm also directing the Department of Justice to propose legislation ensuring that those who commit hate crimes and mass-murders face the death penalty, and that this capital punishment be delivered quickly, decisively and without years of needless delay.

'These are just a few of the areas of cooperation that we can pursue. I am open and ready to listen and discuss all ideas that will actually work and make a very big difference. Republicans and Democrats have proven that we can join together in a bipartisan fashion to address this plague.

'Last year we enacted the Stop School Violence and Fix NICS Acts into law, providing grants to improve school safety and strengthening critical background checks for firearm purchases. At my direction, the Department of Justice banned bump stocks. Last year we prosecuted a record number of firearms offenses. But there is so much more that we have to do.

'Now is the time to set destructive partisanship aside – so destructive – and find the courage to answer hatred with unity, devotion and love. Our future is in our control. America will rise to the challenge. We will always have, and we always will, win.

'The choice is ours and ours alone. It is not up to mentally ill monsters. It is up to us. If we are able to pass great legislation after all of these years, we will ensure that those who were attacked will not have died in vain.

'Thank you very much. Thank you.'