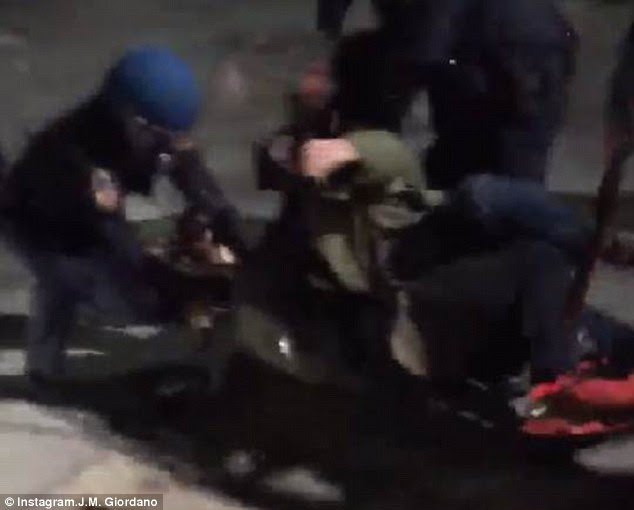 A photo editor for a Baltimore newspaper says he was beaten by police at a protest over the death of Freddie Gray. J.M. Giordano, who works at the City Paper, says Baltimore police 'swarmed over' him and hit him repeatedly. A video posted to the newspaper's website Sunday shows at least two police officers in riot gear hitting and kicking Giordano as City Paper Managing Editor Baynard Woods screams, 'He's a photographer! He's press!' The 41-year-old photographer says the incident happened around 12.30am when someone threw a rock at a police line and hit an officer's shield. Giordano and a protester were standing next to each other when the police line suddenly marched forward and the two men didn't move out of the way quickly enough, each being knocked to the ground. About five or six police officers hit Giordano and the other protester with their shields, the photographer said. Daily Mail Read More>>>>>>

Again, the evil practices of the last and worst form of democracy are all found in tyrannies. Such are the power given to women in their families in the hope that they will inform against their husbands, and the license which is allowed to slaves in order that they may betray their masters; for slaves and women do not conspire against tyrants; and they are of course friendly to tyrannies and also to democracies, since under them they have a good time. For the people too would fain be a monarch, and therefore by them, as well as by the tyrant, the flatterer is held in honor; in democracies he is the demagogue; and the tyrant also has those who associate with him in a humble spirit, which is a work of flattery. Aristotle Politics Bk 4 part xi