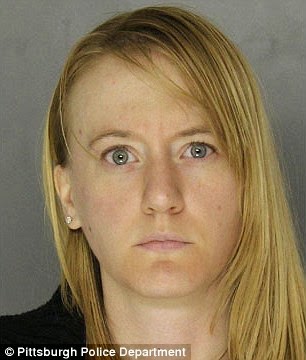 An 'obsessed' elementary school teacher has been arrested after deluging an 11-year-old student 2,400 text messages, gifts and coded notes in her homework in an attempt to get the girl to run away with her, police say. Investigators do not believe that 28-year-old Geraldine Alcorn's interest in the girl was sexual - instead she wanted to steal the child away from her parents and adopt her. The former teacher at Beechwood Elementary School in Pittsburgh continued to contact the student even after she was suspended and told she was being investigated for her behavior by police and Pittsburgh Public Schools, detectives say. Alcorn was arraigned last week on charges of child luring, corruption of minors and attempting to interfere with custody of the child. She was jailed after being unable to post $100,000 bond. Daily Mail Read More>>>>>
at April 01, 2015