How Long Before Baltimore Mayor Stephanie Rawlings-Blake Is Arrested For Abetting The Baltimore Riot? 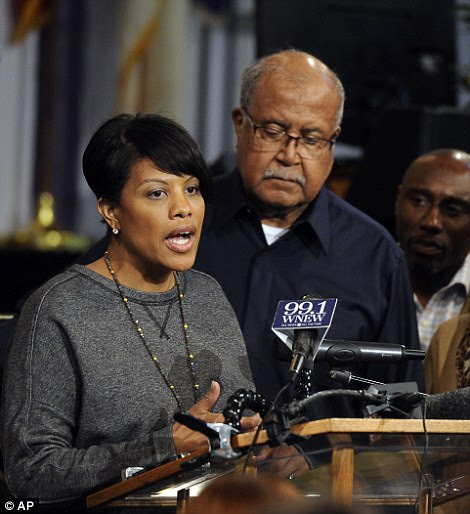 Billions in property damage or just a few hundred million?

Anyone who isn't biased knows that the Mayor incited the violence by:

1. Telling the Police to stand down and let the rioters riot
2. Publicly giving the go ahead to commence the riots
3. Delaying the curfew for one day - giving the niggers thugs  disadvantaged children the opportunity to riot.

This bitch should be arrested.

Baltimore Mayor Stephanie Rawlings-Blake ordered the police to stand down as riots and looting broke out across they city, a new report claims, According to a senior law enforcement source, the embattled mayor effectively told her officers to do nothing as the city began to burn - raising questions as to whether the rioting could have been stopped. Asked by Fox News if the mayor was responsible for the order, the source said, 'You are God damn right it was.' Daily Mail Read More>>>>

Despite a firm denial by Baltimore Mayor Stephanie Rawlings-Blake, a senior law enforcement source charges that she gave an order for police to stand down as riots broke out Monday night, raising more questions about whether some of the violence and looting could have been prevented. The source, who is involved in the enforcement efforts, confirmed to Fox News there was a direct order from the mayor to her police chief Monday night, effectively tying the hands of officers as they were pelted with rocks and bottles. Asked directly if the mayor was the one who gave that order, the source said: "You are God damn right it was." Fox News Read More>>>>>