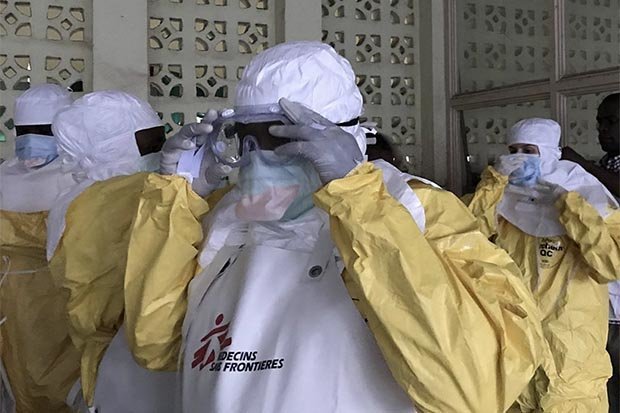 Hard to tell if these are Muslims or evangelicals:

Some people are refusing medical care and turning to preachers and prayers to chase away the threat. Pastors at churches have been encouraging people "pray away" the Ebola instead of receiving vaccines. Ebola is also believed to be a "curse on those who ate stolen meat".

Considering how biased the News Media is against Christianity and how favorably they are towards Islam I bet these three infected men went to Friday Mosque prayers...

Health bosses confirmed two of the three fugitives attended the prayer meeting before they died.Fears now rage the highly infectious disease could spread further as victims fail to grasp the seriousness of the infection. Ebola patients are reportedly relying on spiritual cures rather than trusting advice of doctors. And this is despite thousands of vaccines being deployed the to the Democratic Republic of Congo. At least 27 people have been killed in the latest outbreak to his Africa. "We are on the epidemiological knife edge," Dr. Peter Salama, the World Health Organization's emergency response chief. "The next few weeks will really tell if this outbreak is going to expand to urban areas or if we are going to be able to keep it under control." The Ebola virus spreads through direct contact with either bodily fluids or objects contaminated by someone ill with the disease. Three health care workers are already believed to have become infected with the virus. Aid agencies are battling to persuade sceptical residents about the severity of an outbreak that has killed 27 since April. Source