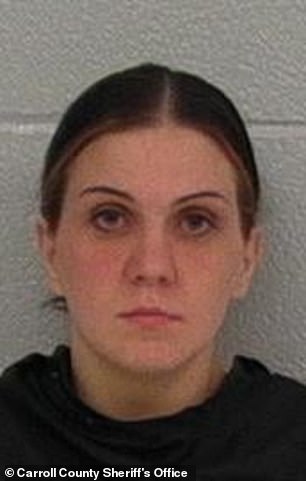 Georgia substitute teacher, 30, is charged with child molestation for 'filming herself masturbating in a classroom full of students'
A substitute teacher was arrested in Georgia on Friday on 19 charges of child molestation after she allegedly masturbated in front of a classroom of seven- and eight-year-old children. According to the Carroll County Sheriff's Office, Amelia Ressler, 30, filmed herself while 'engaged in indecent and immoral acts while in the presence of school-aged children' at Mt. Zion Elementary School in Carroll County. Authorities were alerted to the incident after Ressler herself allegedly disseminated the video and it was seen by a member of the school community. Ressler is facing a child molestation charge for every student that was in the second-grade classroom at the time, but the sheriff's office has warned that the charges may be upgraded as the investigation continues. Authorities believe the incident happened on January 28 at some point between 7:30 a.m. to 2:30 p.m. Source
at February 10, 2021