30 Taliban militants are killed in explosion during bomb-making class at Afghan mosque
At least 30 Taliban fighters have been killed in an explosion at a mosque in Afghanistan during a bomb-making class. The 209th Shaheen Corps - part of the Afghan National Army - said in a statement that 30 fighters including six foreign nationals who were expert mine makers, had been killed in an explosion on Saturday morning. The blast happened at a mosque in the village of Qultaq in the Dowlatabad district of Balkh province. The statement said the bodies of the six foreign nationals could not be identified because of damage caused by the blast. The Taliban fighters had gathered at the mosque to be trained in how to make bombs and IEDs, the Khaama Press News Agency reported. Source 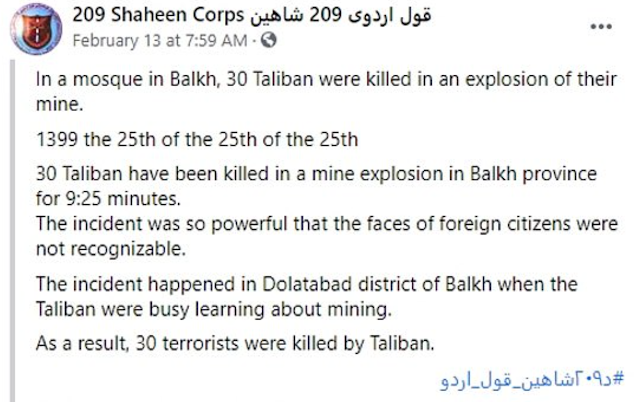