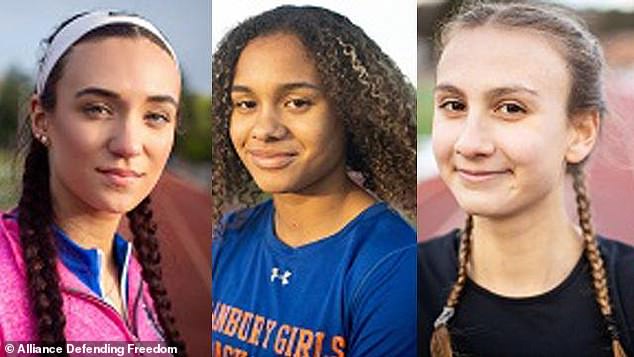 'Biological males are taking our medals': Female track stars speak out after Biden administration withdraws from Trump-era lawsuit to stop transgender athletes competing in high school sports
A Connecticut high school track athlete said she was 'disappointed' after President Joe Biden's Justice Department withdrew from a lawsuit aiming to prevent transgender athletes from competing in girls' high school sports. Alanna Smith, who filed the lawsuit with fellow athletes Selina Soule and Chelsea Mitchell, appeared on Fox News with her lawyer to say girls have 'missed out' on placing on awards podiums after competing against 'biological males.' 'I ran against the biological males at the New England meet because in the 200 meter I took third place when I should have gotten runner up,' Smith told the outlet. 'It’s not really about placement, it’s all about knowing that I work so many hours a week to be able to get runner up at New Englands as a freshman.' Smith said the girls have worked hard to get their stories out so people can 'realize that fairness needs to be restored in out sport and all women's sports.' 'People should realize that a lot of biological females have missed out on making it to meets that really matter like states and regionals and the transgender athletes have taken spots on the podium that belong to biological females,' Smith said. 'We train for so many days a week, so many hours to be the best in our state and the best in our region and these biological males are just taking it away form us and we really deserve it.' Source
at February 25, 2021